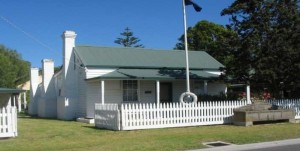 The February meeting of the SEHA was held at the Fisherman’s Cottage Museum on the Foreshore at Tooradin. The Museum is operated by the Cranbourne Shire Historical Society. The curator and caretaker, Rosemary Mynard, gave guided tours of the Museum throughout the day. The Museum is housed in an old cottage, built c.1873. The builder was most likely Matthew Evans who was an early landowner in Tooradin.
Evans owned most of the early town lots in Tooradin and donated land for the Anglican Church in 1890.The cottage is one of the earliest houses built in Tooradin and one of the few remaining examples of the fishermen’s houses that originally dotted both sides of Sawtell’s Inlet at Tooradin in the nineteenth century and early twentieth century.

Amongst the owners of the Cottage was Isabella Poole (nee Kernot) who owned it from 1910 until 1949. Isabella’s father, Henry Foreman Kernot, was a fisherman who had arrived in Tooradin from Hastings in about 1876. Isabella’s father-inlaw, George Poole, and his two brothers Fred and Thomas were early Cranbourne Shire settlers and some of their descendents were involved in the fishing industry at Tooradin.

The Cottage was saved from demolition in 1968 by the action of the foundation members of the Cranbourne Shire Historical Society. Mrs Kath Metherall (the winner of the Garryowen trophy at the Royal Melbourne Show on two occasions),
Mrs Peggy Banks and Mrs Jess Ayres were concerned about the possible demolition of the Cottage so they approached the Cranbourne Shire to purchase it. The Shire did so on the proviso that the group raise half the purchase price of
$6000 and payback the council, which they did eventually. This battle to preserve the Cottage sparked the formation of the Cranbourne Shire Historical Society in August 1968. Many local families donated furnishings and household items to the Museum and the Cottage still receives donations from early families of material of local historical significance.

The School building behind the Museum was originally erected at Monomeith in 1925. After it closed in 1933 it was shifted to the Tooradin North site where it was opened in 1935. The building served the Tooradin North community until it was closed in 1971. The owners of the School site donated the building to the Historical Society and with the generous support of the City of Casey the School was re-opened as a Heritage Education Centre in October 2005.

The Good Country : Cranbourne Shire by Niel Gunson (Published by the Shire of Cranbourne, 1968)